Update 2: Accolades are pouring in for Ragen’s decision to drop out of IRONMAN Arizona. As we wrote recently, Ragen will be judged on the grandeur of her delusions rather than her actions and accomplishments. Dropping out of a race is enough for one Facebook commenter to call her an “IRON WOMAN”. 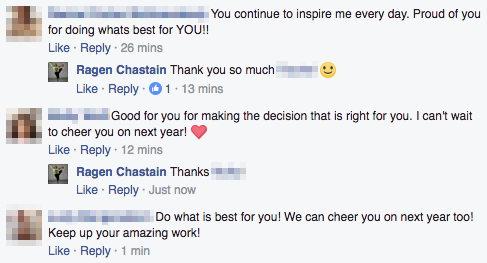 Update: Ragen has officially dropped out of IRONMAN Arizona, citing the excuses she used in her last IronFat update. She took the opportunity to post an “inspiring”  montage of her fake training selfies. At Dances with Facts we prefer this version.

Race day is finally upon us at IRONMAN Arizona in Tempe, AZ. Today international dance champion, marathoner, and elite professional athlete Ragen Chastain competes for fame and glory… or not.

Unfortunately it looks like we are in for an IronFizzle rather than an IronFlop. Ragen flew to Tempe on Friday and completed athlete check-in and registration for 2017, but by all accounts did not take her equipment with her or check her bike in the transition area before the cut-off on Saturday. She spent yesterday ranting about the presidential election on Facebook late into the night without any mention of her IRONMAN attempt, and was still at it at 0330 MST. A friendly message asking if she would be competing and wishing her good luck was removed within minutes. Her last IronFat update was on November 11 — a vague implication she would probably not be competing, even though she could totally $100% finish the swim and bike.

Ragen has a long history of dropping out of athletic events, and it isn’t looking promising this time. Stay tuned for further updates.

Forecasts are showing a high of approximately 26°C/78.8°F with mostly a mostly sunny morning and some clouds and showers in the afternoon. Water temperature is well under 24.5ºC/76.1ºF, which means the race is wetsuit legal.

The race consists of three segments: a 2.4 mile swim, a 112 mile bike ride, and a 26.2 mile run. All athletes have 2:20 to complete the swim, and approximately 8:10 and 6:30 for the bike and run, respectively. The swim is a self-seeded rolling start rather than a wave start, which means athletes cross a timing mat under the starting arch in a continuous stream. Athlete bib number marking begins at 0500, and the age group swim start is at 0650 and is expected to be complete by 0720. Race results will be available on the official results page, and race photos will be posted on FinisherPix. Ragen’s bib number is 1270.