Ragen has a strong tradition of using complaints of apparent abuse from “trolls” to distract attention from her critics. Last year she made allegations of rape threats and stalking after she was caught red-handed faking training selfies in Fake Selfie Sunday. Within hours of today’s Dances with Facts post about her lack of IronFat updates, she posted a Facebook message about a Twitter account supposedly created to harass her. As usual she has received a lot of sympathy from her followers, and even took the time to stroke her own ego in the comments, claiming the constant stream of abuse she receives proves what an effective activist she is. 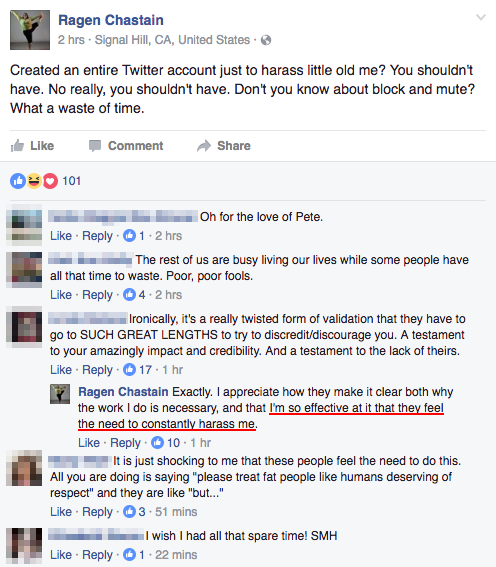 Unfortunately for Ragen, Twitter is completely public, and a quick search makes it plainly obvious the account she is talking about does not exist. She has received a grand total of four remotely negative @username mentions on Twitter in the last two weeks, three of them in response to her jealous rant about Maria Kang on Ravishly today. All the users have other posting histories on Twitter, and would be unable to send her a direct message unless she followed them. There is no account created to harass her, and moreover, most of the “abuse” is not particularly abusive in nature. 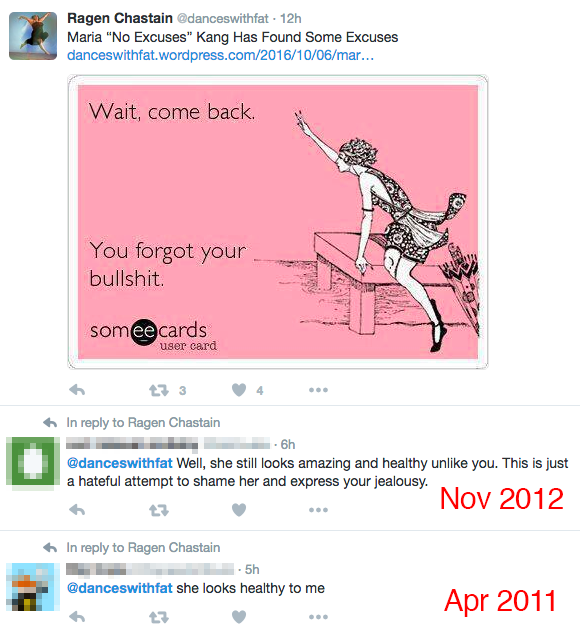 The only possible candidate for the mysterious new Ragen-hating account is one created last month which has sent her a single non-abusive reply among its tweets. Truly shocking stuff.

Ragen’s accounts of her “abuse” have been a frequent target of criticism on this blog. In a 2014 Dances with Fat post, Ragen claimed she receives at least 200 abusive messages and death threats every day, yet there is simply no evidence this is true. In fact, one of her classic claims that she received over 5000 messages telling her to kill herself in 48 hours was proven to be completely fabricated. Twitter is one of the few platforms Ragen participates in where she is not in complete control over the content, and the silence about her is deafening. On average she receives a negative @username mention once every few weeks unless she posts something particularly egregious. Ragen wants us to believe she has the most polite “trolls” in the world who all only contact her in private where nobody will see their moderated comments. It is simply beyond belief, and is a perfect illustration of Ragen’s profound dishonesty.