professional
(of a person) engaged in a specified activity as one’s main paid occupation rather than as a pastime.
“a professional boxer” 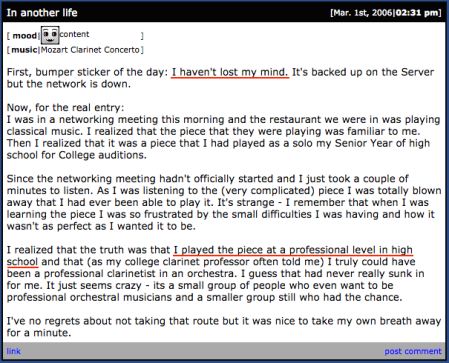 At one time Ragen’s dream was to be a top level professional competitive dancer. In 2005, she had an “amazing life experience” where a therapist convinced her she no longer needed to lose weight to compete. This didn’t last long, since she continued to attempt weight loss until at least 2007, but you can clearly see her dedication to her one big goal in life.

“I will be a Masters Champion and people will want me to dance in their showcases at this weight, at 50 pounds lighter, or at 50 pounds heavier.”

Of course, this didn’t happen. The last and only time Ragen won a dance title of any remote significance was a month later at the American Country Dance Association “national championships”, a small regional event with no pre-qualifying. She and her partner competed against the only other couple that showed up in Division III, the lowest possible novice level of competition. That was the end of Ragen’s success as a competitive dancer.

Over the next few years, Ragen struggled with her weight impacting her ability to dance. She split from her original dancing partner and had a falling out with her coach over her weight. Things were not going well, and she admitted on multiple occasions she would never be able to advance from the level of rank amateur unless she lost weight.

“I’m too tired to continue being fat. I am tired to exhaustion of having to compensate for my weight. […] Dancing does not adapt to larger bodies.”

“The day you are in rehearsal and you realize that you physically can’t make it around in time to hit the choreography and that there is nothing more that you can do with your technique, it’s time to break out the celery sticks and gym membership.”

“I just think that if someone can’t move it and can’t/doesn’t want to lose it, then professional dancing is not for them.”

Ragen continued to write about her dancing lessons, her “professional-level dancing” and so on. In 2008, records show she attempted to compete in the ACDA’s Division II (“intermediate”), where she either “won” uncontested showcases or placed dead last. Late that year, after coming in last place at the “LoneStar Invitation 2008”, she announced she was “moving up into the professional division” with her new dance partner. There is no evidence Ragen ever competed at this level or won any dance titles. Ragen would undoubtedly be the first to tell you if she did.

…then a few weeks later Ragen was suddenly a “professional dancer”.

And there it is: Ragen’s entire basis for calling herself a professional dancer is that she decided she would think about competing in a dance circuit with “professional” in the name, and managed to convince a few people to pay her for a handful of group classes. She never mentioned competing at this level, there is no record she competed (let alone won anything), and she certainly wasn’t being paid to dance. For all intents and purposes, Ragen gave up competitive dancing after her incredibly poor showing in 2008. As usual, instead of actually putting in the effort and following through to achieve a goal, she took the easy way out, gave herself a gold star and a pat on the back, and made up a meaningless title for herself (“trained researcher”, anyone?). She has continued to call herself a “professional dancer” and “professional athlete” since 2008.